Hybrid vehicles aren’t going to be restricted by gravity for much longer! At the end of November 2017, three major European companies - Siemens, Airbus and Rolls-Royce -announced that they are working toward testing a hybrid-electric propulsion system in a relatively large aircraft…essentially a flying test platform that will be based on a 100-seat passenger plane. The project, dubbed the E-Fan X, could see a demo version of a hybrid-electric passenger plane take off in 2020. By 2025, it is possible we could see quieter and more sustainable commercial passenger planes that could seat 50 to 100 passengers. 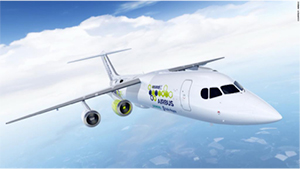 Airbus will be in charge of overall integration, test flights and delivering the energy storage systems. Rolls-Royce will provide a 2.5 megawatt (MW) turbine with integrated generator that will supply the electrical power for the electrical propulsion system, while Siemens is developing an electric propulsion system that will have two MW of power (and is thus expected to break existing records for lightweight drive systems).

The electric propulsion system is an outcome of a separate Airbus-Siemens collaborative effort launched in 2016. The systems that have been developed to date have had outputs of only up to 1/4 MW, versus the 2 MW Siemens is developing now. The electric propulsion system will obtain its power from a generator that will be powered by a turbine in the fuselage. Lithium-ion batteries, each of which will have 700-kilowatts of power, will assist in take-off and climbing. 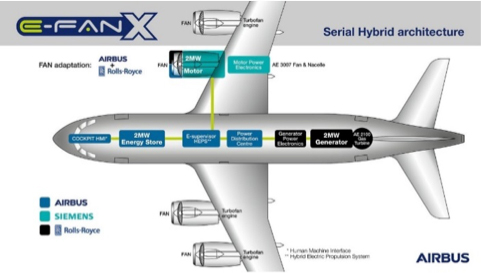 The collaborative project seeks to replace one of a passenger plane’s four engines with an electric alternative. The companies will start by using a two MW electric motor as one of the aircraft's four engines. If tests are successful, a second fossil fuel-driven engine could be swapped out for an electric motor.

The push for a hybrid plane engine comes as the EU has pressed the aviation industry to clean up the skies. By 2050, the EU is seeking a 75% reduction of CO2, a 90% reduction of NOx, and to lower noise levels by 65%. Commercial planes account for about 2% of carbon emissions that contribute to climate change, but the industry aims for carbon-neutral growth over the next decade through a combination of new technology and biofuels. Beyond the environmental benefits, a hybrid plane could also save carriers money on fuel costs and, because they’re quieter, could enable carriers to fly more at night.

Because of battery weight and the cost of cooling equipment, a fully electric plane is not currently believed feasible; however, the trio expect to be able to drastically reduce the size and weight of aircrafts, based on the extensive amount of research conducted in advanced lightweight engineering and high-tech materials. Nonetheless, these three European firms are not the only ones betting on aviation's electric future. EasyJet, a major European carrier, announced in September that it is working with American start-up Wright Electric to build an all-electric airliner. Boeing and BlueJet have partnered up with Seattle-based start-up Zunum to develop a commuter electric aircraft. They tout that the plane could start flying in 2022. Both projects are ambitious in their scale, and will face significant challenges to get up and running.

Experimentation with all electric planes continue on other fronts. In mid-2016, a two-seater aircraft set seven new world records when it climbed more than 20,000 feet in less than two minutes, and reached speeds of 142 miles per hour. The plane travelled nonstop for 300 miles, burning zero fuel and emitting no emissions. The plane used an all-electric motor powered by a single battery.

It is expected that the lessons learned from today’s initiatives will pave the way to a hybrid single-aisle commercial aircraft that is safe, efficient and cost-effective in the near furture. There is a lot at stake in the race to innovate: the electric aircraft market is projected to reach over $22 billion in the next fifteen years. Kinda gives the term ‘E-mobility’ a loftier meaning!