The presence of other high grade, near surface light rare earth resources enriched in neodymium-praseodymium (Nd-Pr) in the T-Zone and Tardiff Zones of the property provide the potential for near term, small scale development to produce Nd-Pr-rich concentrates for export. In June 2019, Avalon and Cheetah Resources Pty Ltd. signed a purchase and sale agreement under which Cheetah acquired ownership of the near-surface T-Zone and Tardiff Zone resources for C$5 million.

Avalon retains its ownership of the mineral resources below a depth of 150 metres above sea level (including the Basal Zone deposit) and will continue to have access to the property for exploration, development and mining purposes. Avalon will also continue to assist Cheetah where needed in executing its planned work programs and retain its 3% NSR type royalty.

The Nechalacho property is located at Thor Lake in the Mackenzie Mining District of the Northwest Territories, approximately 100 km southeast of the city of Yellowknife. The property is comprised of eight contiguous mining leases totalling 14,229 acres (5,786 hectares). 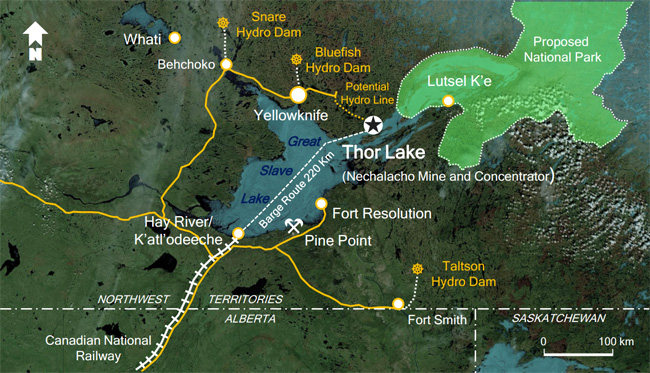 In 2012, Avalon signed its first Accommodation Agreement with the Deninu K’ue First Nation. A similar Participation Agreement was signed with the Northwest Territory Métis Nation in February 2014. The Agreements include measures to mitigate environmental and cultural impacts that may result from the Project’s development. Implementation committees meet during periods of project activity to review Agreement commitments, work on joint-projects and share updates about their respective organizations.

On April 17, 2013, Avalon announced the completion of a positive Feasibility Study on the Basal Zone of its Nechalacho property. The Feasibility Study was prepared by SNC-Lavalin Inc. and was the first feasibility-level study to be completed on a major heavy rare earth project outside of China. The results confirmed that the Basal Zone on the Nechalacho property is technically feasible and economically robust as a producer of the heavy rare earth elements.