The Warren Township Anorthosite Project is an advanced specialty industrial minerals development opportunity located 100 km west of Timmins, Ontario in the Porcupine Mining Division. The project property consists of a 21 year, 673.7 ha renewable surface and mining rights Lease. The Lease is 100% owned by Avalon and is renewable for further terms.

The Lease covers a portion of the Shawmere Anorthosite Complex that hosts a significant resource of high purity anorthosite, consisting of up to 98% high calcium plagioclase feldspar. Anorthosite is an unusual mafic igneous intrusive rock consisting of greater than 90% plagioclase feldspar. Previous work has demonstrated that this material can be processed to produce a high quality calcium feldspar raw material for the manufacture of reinforcing glass fibre and other industrial products, such as mineral fillers.

The property is located near road and rail infrastructure and is close to markets in southern Ontario and the northeastern United States.

After staking the property in 2002, Avalon prepared a Pre-Feasibility Study and business plan updating the original study conducted by the previous owners of the property. Avalon’s February 2003 Pre-Feasibility Study concluded that there was market opportunity in processing calcium feldspar raw material for reinforcing glass fibre. Since that time, the fibreglass market has continued to grow with new emerging applications, such as composites for wind turbine blades.

Extensive processing and sample testing for multiple potential customers continued for the next few years.

Avalon continues to work with the U.S. glass industry in a consultative manner; however, the project remains on hold pending renewed demand from industrial consumers. There are no timelines in place for initiation of any new work programs on the project at this time, save for property maintenance. 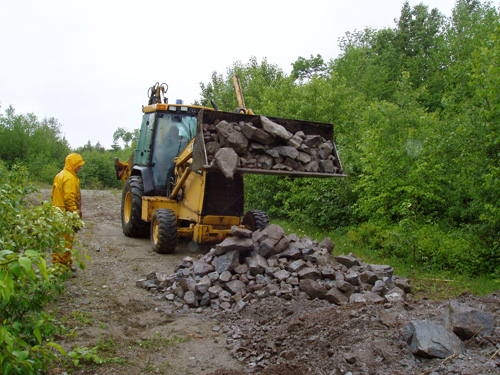 In 2012, Avalon obtained Aggregate Permit #608822 under the Ontario Aggregate Resources Act encompassing 240 ha of the 673 ha mining lease, with the balance to be permitted as needed in the future. As a component of the permitting process, Avalon completed baseline Environmental, Archaeological and Hydrogeological studies, along with community engagement in the Foleyet area and with First Nations in the Chapleau area. In March 2009, Avalon entered into a Memorandum of Understanding with the Chapleau Cree First Nation (CCFN), which laid out the parameters of a longer term partnering arrangement, with CCFN acting for a group of local First Nations.