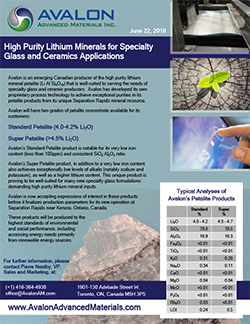 The Separation Rapids deposit is one of the largest “complex-type” lithium-cesium-tantalum pegmatite deposits in the world, unusual in its enrichment in the rare, high purity lithium mineral petalite. Petalite is the preferred lithium mineral feedstock for certain specialty glass-ceramic products for technical reasons, notably its consistently low impurity levels.

Petalite also offers potential to produce a high purity lithium chemical product at a relatively low-cost to serve the needs of lithium ion re-chargeable battery manufacturers. Growing demand for rechargeable batteries in electric vehicles and home energy storage is expected to result in continued rapid growth in global consumption of lithium. Many industry analysts are predicting that the demand for lithium will double over the next 5-10 years, creating a supply deficit, as existing producers struggle to meet the new demand.

In August 2018, Avalon completed an updated Preliminary Economic Assessment, reflecting a simplified business model that focuses on initial production of lithium mineral concentrates, with potential for future expansion into production of the battery materials lithium carbonate and lithium hydroxide.

Lithium is not the only mineral of interest at the Separation Rapids project. Highly fractionated pegmatites, like the Separation Rapids deposit, contain many minerals of economic importance. The deposit has the potential for recovery of by-products including high purity silica, feldspar, rubidium, cesium and tantalum. 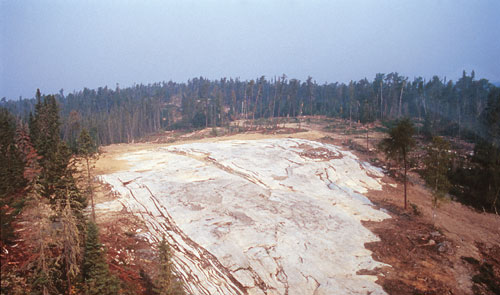 The 100% owned Separation Rapids property is situated approximately 70 km by road north of Kenora, Ontario. The property consists of 17 mineral claims and one mining lease covering a combined area of approximately 3,910 hectares (9,172 acres) in the Paterson Lake Area, Kenora Mining Division, all of which are 100% owned by Avalon.  The lease covers an area of 420.39 hectares over the area of the main lithium pegmatite deposit and adjacent lands that may be used for mine development infrastructure.

Early exploration work culminated in 1999 with the completion of a comprehensive Pre-Feasibility Study on the viability of producing petalite with by-product feldspars, by independent consultant Micon International Inc. The business model at the time involved production of high purity concentrates of petalite for sale to glass-ceramics manufacturers. While the study produced a positive result, Avalon was unable to secure the necessary commitments on off-take from consumers to justify further investment at that time and the project was put on hold.

Over the next decade, Avalon continued to study alternative lithium product ideas for markets in glass, ceramics and specialty composite materials.

In 2014, Avalon re-activated the Separation Rapids project after receiving expressions of interest in its petalite from several international glass manufacturers. The process flowsheet was greatly simplified and in 2015 new petalite samples were produced for analysis by these customers - all of whom confirmed they met the desired specifications in terms of lithium grade and impurity levels. Avalon then conducted a pilot plant trial to successfully produce one tonne of concentrate for further evaluation by the customers in glass-ceramics applications.

Avalon concurrently began investigating how its petalite could be used to produce high purity lithium chemicals for the battery industry relatively inexpensively compared to other existing alternative lithium source materials. Market studies suggest that lithium hydroxide will be in increasing demand as a feedstock for lithium ion battery cathode chemistries. Consequently, Avalon developed a process flowsheet to make lithium hydroxide from its petalite. The potential for production of high grade lithium hydroxide (99.9%) was demonstrated through laboratory test work performed in 2015 and defined in a Preliminary Economic Assessment filed in 2016.

Avalon carried out additional drilling (April-May 2017, Jan-Feb 2018) to expand the lithium resource and provide better definition of the lithium mineralogical zoning in the total resource.

The updated PEA utilizes a plant throughput rate of 475,000 tonnes per annum compared to the 950,000 tpa rate used in the 2016 PEA. This will result in a 20 year operating life, based on the present known mineral resources, with annual production of 71,500 tonnes of petalite concentrate; 11,800 tonnes of lepidolite concentrate (both for 18.5 years); and, commencing in Year 6, 100,000 tonnes of feldspar (through to Year 20). The upfront capital expenditure requirement is C$77.7 million with a further C$13.7 million planned for the feldspar circuit in Years 5/6 (or once payback of the initial capital is complete). Average annual revenue is estimated at C$90 million versus average annual costs of C$60 million, resulting in a pre-tax Net Present Value (at 8% discount rate) of C$156 million and a pre-tax Internal Rate of Return of 27.1%. The post-tax NPV is calculated at C$102 million and the IRR at 22.7%.

Petalite production will be supplemented with the production of a second lithium mineral concentrate: lepidolite. Lepidolite is a lithium mineral which is in growing demand for conversion to lithium carbonate. Avalon has a preliminary off-take agreement in place with Lepidico Ltd., of Perth, Australia. Lepidico is currently planning to develop a lithium carbonate demonstration production facility in Sudbury, Ontario.

Avalon's 2016 PEA presented a model focused on the conversion of petalite concentrate into lithium hydroxide for the battery and energy storage industries. This remains an opportunity for a future expansion of the operation as additional mineral resources are delineated. Development into these markets would start with the addition of a pilot scale lithium hydroxide production circuit at the mine site to produce trial quantities of the battery material product and prove the innovative, new process flowsheet developed by Avalon in 2016. This process offers a number of advantages over the traditional flowsheet, mainly through lower chemical consumption and less waste products for disposal.

The current development model results in a small environmental footprint, including low GHG emissions and almost non-existent air emissions. There are no anticipated environmental impacts of concern, with the mineral deposit and waste rock being non-toxic and non-acid generating and minimal water discharge being anticipated.

Note: the PEA is preliminary in nature, includes Inferred mineral resources that are considered too speculative geologically to have the economic considerations applied to them that would enable them to be categorized as mineral reserves, and there is no certainty that the PEA will be realized.

Avalon has received the necessary approvals to proceed with a 2,500 tonne bulk sample extraction program that was originally planned for 2019. Avalon can now proceed with the bulk sampling program for pilot plant processing to recover petalite product samples for testing and qualification by glass and ceramic companies that have expressed interest in the high-purity petalite mineral product.

A comprehensive Feasibility Study will be completed once off-take agreements are concluded and additional financing is in place. Some additional drilling will be undertaken to bring more of the Inferred resources into the Measured and Indicated categories.

Avalon continues to explore for new lithium pegmatites, particularly on the western extension of the property, where a number of new petalite occurrences have been identified, but never previously drilled, including the Glitter pegmatite.

Please note that the projected timeline is reliant on a positive Feasibility Study as well as offtake commitments, project financing, and timely receipt of all permits and environmental approvals.

Avalon completed environmental baseline studies in the project area in 1999, ensuring that local environmental sensitivities were identified at an early stage. This study was updated in 2007 and was further updated in 2013 to completion of a Species at Risk Act study. Avalon completed additional waste rock and tailing assessments and work is planned to further assess tailings from the new process to update the tailing management facility and water treatment plant design if necessary. In addition to these assessments, a draft site layout and water management plan has been completed for discussion with all communities of interest prior to finalizing the Project Description which, when submitted, formally starts the permitting process.

The property lies within the traditional land use area of the Wabaseemoong Independent Nations (“WIN”) of Whitedog, Ontario: an Aboriginal community located approximately 35 km southwest of the property. In August 1999, Avalon signed a Memorandum of Understanding with WIN which was renewed in May, 2013. Avalon is committed to developing the project in co-operation with WIN.  In addition, Avalon has initiated discussions with the Métis Nation of Ontario.

*These programs are being conducted under the direction of David Marsh, Senior Vice-President, Metallurgy and Technology Development and the Qualified Person for the technical and scientific information.