To be or not to be...Germanium

A bit of ‘advanced material history’ caught my interest while watching a black & white flick on TCM earlier this week, in which there was a specific reference to a “germanium transistor” as the dad was fixing his son’s transistor radio. My ears perked up immediately, and I of course picked up my laptop. 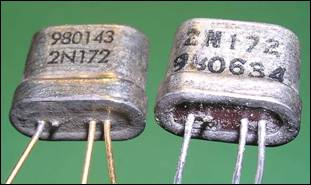 While TI manufactured germanium transistors well into the 1960s, germanium parts had their heyday during the first decade of semiconductor electronics, before being widely replaced by ultra-high purity silicon parts. For most uses, silicon offers superior performance and quality control, at lower cost. Technically, a silicon transistor has:

The music world, however, is a whole different beast. To this day, germanium remains highly desirable for certain sounds, cropping up in everything - including germanium transistor based studio electronics.

The choice between silicon and germanium transistors apparently feeds an ongoing debate as to which offers the best tone. Apparently, stomp boxes (a simple percussion instrument placed under the foot, which is tapped or stamped on rhythmically to produce a sound similar to that of a bass drum) that feature silicon transistors tend to sound more like old tube amps being pushed hard. In contrast, germanium transistors produce a warmer, smoother, more-ear pleasing distortion. Germanium transistors also seem to react well to changes in volume and can detect small changes in signals - hence the electronics are more sensitive. For the less disciplined ear (like myself), I suppose, whatever the application, either material can be used.

Beyond transistors, germanium is also used to create alloys and as a phosphor in fluorescent lamps. Both germanium and germanium oxide (GeO) are transparent to infrared radiation and are used in infrared optical instruments and infrared detectors. Some germanium compounds seem to be effective in killing types of bacteria and are currently being studied for use in chemotherapy. The alloy Gd5Si2Ge2 is also known to enhance the magnetocaloric effect of gadolinium: the effect being that the temperature of the material increases when it enters certain magnetic field and the temperature drops when it leaves the magnetic field.